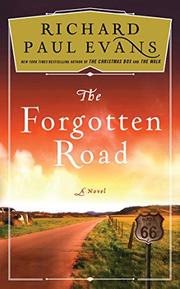 Evans’ Broken Road series begins in medias res, in the Mojave Desert (The Broken Road, 2017), and this second volume returns to the beginning.

A plane has crashed, killing all aboard, and no one knows that Charles James missed the flight. Charles, pitchman extraordinaire, sees the disaster as a chance to remake his life. He embarks on a pedestrian pilgrimage from downtown Chicago to Santa Monica, where his ex-wife, Monica, lives, starting his walk with $13,000 and a heavy conscience. Newspaper headlines and overheard conversations remind him of the tragic flight he’s missed. Readers nostalgic for a bygone America will enjoy the kitsch, conversations, and half-forgotten history in what begins as a casual travelogue. “Route 66 is America as it used to be,” a woman tells him. There are “Burma-Shave-style” signs, a huge fiberglass Paul Bunyon (with an “o”) holding a hot dog instead of an axe, and a restaurant that once was a polka-dot bus. The novel’s pace is leisurely and entertaining, with brief diversions about the famous and semifamous who hailed from towns along the way. Charles betrays occasional self-pity as he struggles to redefine himself—he won’t—he can’t—return to his previous life, but perhaps he can see Monica again, become the person he always should have been. Near St. Louis, a young woman offers him a ride to guide him through a “postapocalyptic war zone,” because she fears for this complete stranger’s safety. She is a decent and kind person, and the symbolism is clear in that her name is Monika (with a “k”). Along the way Charles debates with a man about God, meets a frightening biker gang, and sweats with migrant workers. The road to Santa Monica is paved with self-discovery, and maybe—maybe—it leads him back to Monica.

An easy and enjoyable read about a search for redemption, but begin with The Broken Road.