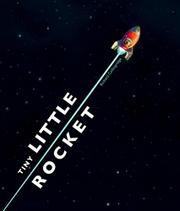 This rocket hopes to take its readers on a birthday blast—but there may or may not be enough fuel.

Once a year, a one-seat rocket shoots out from Earth. Why? To reveal a special congratulatory banner for a once-a-year event. The second-person narration puts readers in the pilot’s seat and, through a (mostly) ballad-stanza rhyme scheme (abcb), sends them on a journey toward the sun, past meteors, and into the Kuiper belt. The final pages include additional information on how birthdays are measured against the Earth’s rotations around the sun. Collingridge aims for the stars with this title, and he mostly succeeds. The rhyme scheme flows smoothly, which will make listeners happy, but the illustrations (possibly a combination of paint with digital enhancements) may leave the viewers feeling a little cold. The pilot is seen only with a 1960s-style fishbowl helmet that completely obscures the face, gender, and race by reflecting the interior of the rocket ship. This may allow readers/listeners to picture themselves in the role, but it also may divest them of any emotional connection to the story. The last pages—the backside of a triple-gatefold spread—label the planets and include Pluto. While Pluto is correctly labeled as a dwarf planet, it’s an unusual choice to include it but not the other dwarfs: Ceres, Eris, etc. The illustration also neglects to include the asteroid belt or any of the solar system’s moons.

A fair choice, but it may need some support to really blast off.