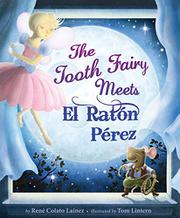 Mexican-American Miguelito loses his tooth and so begins an amusing battle between the Tooth Fairy and El Ratón Pérez. Colato Laínez keeps the storytelling lively with bilingual exclamations seamlessly embedded in the dialogue between the two tooth-seekers. Through a series of entertaining misadventures the tooth seems unattainable until the rivals agree to work together. Lintern infuses the pixie Tooth Fairy with glowing pastel colors while portraying the dashing El Ratón Pérez with contrasting earthy hues. To perhaps signify the characters’ common goal and eventual collaboration, the illustrator uses the same pale pink for the fairy’s wings and the mouse’s ears. After El Ratón Pérez uses el diente to fashion a rocket ship to visit the moon, the Tooth Fairy gets the tooth to help build her sparkling castle. And not only is Miguelito rewarded with two shiny coins under his pillow, but readers are treated to a clever introduction to two charming folk customs. (author’s note, glossary of Spanish terms) (Picture book. 4-7)