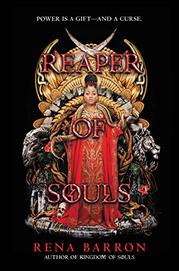 From the Kingdom of Souls series, volume 2

Arrah is back and saving the world in this sequel to Kingdom of Souls (2019).

With the magic of multiple chieftains’ kas coursing through her, Arrah is now the only person with the strength to release the Demon King, which means she must stay away from him lest this event trigger cataclysmic events. As Arrah attempts to make her way in a world still reeling from the actions of her deceased mother and sister, she’s tormented by thoughts from the Demon King that infiltrate her mind. Added to this are surfacing memories of Dimma, the Unnamed orisha, that frighten Arrah because she does not know where they are coming from. Chapters shift in perspective between Arrah, her love interest, Rudjek, and Dimma’s memories. The stakes are high with the fate of many hanging in the balance: Arrah, Rudjek, and their friends and allies faced incredible challenges in the previous book and also in this installment, but perhaps most terrifying of all is what Arrah must face within herself. This story, with its remarkably well-spun plot twists, will satisfy readers who crave realness in their fantasies and is a satisfying, fast-paced, and almost brutal sequel that sets the stage for the third book. Most human characters are Black; some people from the North (like Rudjek’s mother) have light skin.

Intense, raw, real, and sure to please.