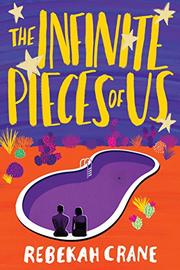 THE INFINITE PIECES OF US

Esther Ainsworth’s family decides to run away from the problems they blame her for by uprooting themselves from Ohio to the New Mexico desert.

Sixteen-year-old math-obsessed Esther can’t quite forget the life she was forced to leave behind for a new one in Truth or Consequences, New Mexico, especially since her little sister, Hannah, now hates her. Esther forms a friendship with Color, a red-haired, brown-skinned girl who cleans houses (including Esther’s) part time. Color introduces her to “Heaven,” a now-closed former Blockbuster franchise where she houses all the discarded items she’s liberated from places she’s cleaned. There, Esther forges more new friendships—with Moss, Color’s brother; Jesús, a Latinx gay boy; and Beth, the science-shirt–wearing lesbian who attends her church. Esther reveals that she had a baby with her South Asian boyfriend, Amit, and was forced by her family to give her up for adoption. Everything is complicated by the fact that Esther’s own father isn’t in the picture and she is not close to her stepfather (Esther and her family are white). While the healing of Esther and Hannah’s broken relationship feels a bit too easily earned, Crane (The Upside of Falling Down, 2018, etc.) has created an organic and dynamic friendship group. Esther’s first-person narration, including her framing of existential questions as “Complex Math Problems,” is honest and endearing.

A compelling narrative about the power of friendship, faith, self-acceptance, and forgiveness.