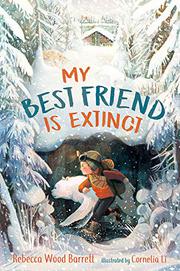 MY BEST FRIEND IS EXTINCT

In the middle of a blizzard, a young boy helps an injured prehistoric animal.

This is the story of 10-year-old Henry, who has moved with his mother—his father died when he was small—to a snowy mountain town where it has been hard to make friends. Making matters worse is a concussion he sustained when bullies collapsed a snow tunnel onto him. When Henry finds an injured prehistoric short-faced bear, he names him Yarp and, in secret, nurses him back to health. But what creature injured Yarp in the first place? Henry is determined to keep his new friend safe, but this proves to be a difficult challenge with no assistance from adults. There are two distinct modes for this title, which combines the simple reality of loneliness with the fantasy of befriending extinct animals. Fans of prehistoric animals will gobble up the exciting sections with saber-toothed cats, although the reason these creatures are milling about is not explained. A different rhythm is created around the story elements that address trying to make friends and telling lies, which gets Henry into trouble. Unfortunately, supporting characters are less well developed than the lead, but, ultimately, the story comes to a dramatic and tidy end. Soft pen-and-ink illustrations throughout add charm to the story.

A good choice for lovers of animal and friendship stories.