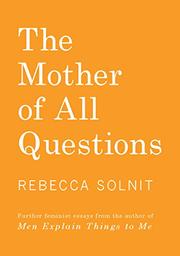 THE MOTHER OF ALL QUESTIONS

Further Reports from the Feminist Revolutions

A distinguished cultural critic tackles “the binaries and boundaries of gender” while examining the continuing evolution of feminism.

In her latest collection, Harper’s contributing editor Solnit (Men Explain Things to Me, 2014, etc.) examines how women continue to struggle to make their voices heard in a violent, misogynist world. In the first section, the author deals with the act of silencing. Whether in professional situations involving unfair treatment or personal ones involving abuse or rape, patriarchal culture has discouraged women from speaking out against gender injustice. At the same time, men have also been forced into silence about their interior lives in exchange for “power and membership” in patriarchy. Yet women—and men—continue to make progress. Solnit points to the changes in attitude toward rape and how comedians like Tina Fey and Amy Schumer have openly challenged perpetrators. They have not succeeded in winning the war “for everyone to have their basic human rights respected,” but they have helped turn the tide against acceptance of rape culture. Moreover, social initiatives like the Obama administration's 2014 “It’s On Us” project to “get bystanders, particularly men,” to protect potential victims of assault are positive signs of further change. In the second section of the book, the author focuses more on language used in discourse about women, which not only emphasizes dependency, but also overlooks how the concept of gender is built upon categories that exclude differences that transcend the male/female binary. She also offers commentary on how culturally iconic works—e.g., Lolita—continue to feed into ideas of women as “disposable…absent, or worthless.” Others, like the 1956 film Giant, can be read to suggest that patriarchy can successfully be replaced by “some kind of open, negotiated reshuffling of everything.” Trenchant and hopeful, the book reveals that the ongoing work of righting the wrongs of patriarchy is only part of a much larger project of social justice for all people.

As always, Solnit is eloquent and sharply insightful.