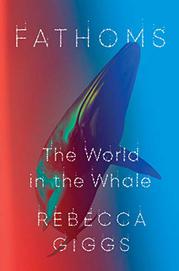 The World in the Whale

Seafaring scrutiny of whales, their oceanic environment, and the dangers to their survival.

For Australian journalist Giggs, the sighting of a humpback whale beached on a local shoreline sparked her curiosity for the life and lore of the storied marine mammal. She became captivated by the animal after an informative encounter with the wildlife officer who euthanized the whale. The entire ordeal inspired a research project that encompasses not only physical and ecological elements, but also artistic representations and philosophy. Giggs presents the bounty of that scholarship in crisp, creatively written chapters addressing the many layers of the whale population’s unique physiology and evolutionary history, sociality, above-water balletic athleticism, and enigmatic “biophony” of their vocalizations. Most importantly, she analyzes how their behavior can be predictive for the Earth’s future. An adventurous explorer, the author immerses readers in an Australian whale watching tour and then dips into the deep international waters of Japan, where whaling ships flourish. With a conservationist mindset, Giggs reiterates that the whale and its life, legacy, and precarious environmental state are reflective of the greater issues the Earth faces, from ecological upheaval to overconsumption. Whether describing the majesty of the blue whale or the human assault on sea ecology due to paper and plastic pollution, the author’s prose is poetic, beautifully smooth, urgently readable, and eloquently informative. Her passion for whales leaps off the page, urging readers to care and—even more so—become involved in their protection and preservation. Throughout the book, the author’s debut, she brilliantly exposes “how regular human life seeped into the habitats of wildlife, and how wildlife returned back to us, the evidence of our obliviousness.” Refreshingly, she also reveals glimmers of hope regarding what whales can teach the human race about our capacity to ecologically coexist with the natural world.

A thoughtful, ambitiously crafted appeal for the preservation of marine mammals.