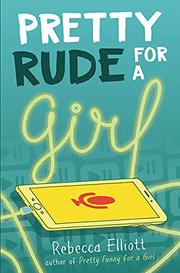 PRETTY RUDE FOR A GIRL

Haylah furthers her comedy career and deals with romantic and familial entanglements.

Set a few months after the events of 2020’s Pretty Funny for a Girl, this follow-up continues the adventures of newly more confident aspiring stand-up comedian Haylah (who now goes by Hay instead of Pig, the fatphobic nickname she had tried to reclaim and defuse). The 15-year-old English girl has begun to upload snarky comedy bits to YouTube and isn’t quite as insecure about her size or looks as she was before. But Hay still faces challenges: She’s not sure why her boyfriend, Dylan, spends hours with her but has yet to kiss her; she’s got mixed feelings about her divorced mum’s increasingly serious partner; and her estranged father makes a surprise appearance at a gig, and the shock of seeing him throws her off stride. Elliott digs deeper into the residual self-doubt that creeps up, even as Hay feels more assured about her worth and talent. There’s still deprecating humor, but this time it’s more balanced, and the slow-burn romance is thoughtfully (and funnily) described. Hay’s relationship with her much-younger brother, Noah, is once again a highlight, and her character growth is evident in how she resolves conflict with her family and best friends. Most characters are cued as White; Dylan is Chinese and implied White.

A charming sequel of self-discovery, first love, and forgiveness.