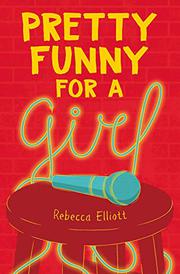 PRETTY FUNNY FOR A GIRL

An English teen who struggles with body image dreams of following in the footsteps of famous funny women.

Haylah Swinton isn’t thin, girly, or boy crazy like her best friends, Chloe and Kas, but she is funny and dreams of pursuing a comedy career. When an otherwise forgettable school talent show reveals that cute, popular Leo Jackson is a gifted stand-up, Haylah, who’s called “Pig” at school at her insistence (her response to bullying), is instantly lovestruck. Unable to get up the nerve to talk to Leo, Haylah leaves anonymous jokes in his locker. Leo figures out she’s the secret comedian and asks her to help him write a set for a youth comedy contest in London. Haylah agrees even though her two besties warn her that he’s using her for her talent. The author seems well versed in comedy writing and the sexism women face in that profession. Haylah’s relationships with her mother and 4-year-old brother, Noah, are well developed (she has a sweet and somewhat maternal connection with Noah). Unfortunately, the story suffers from weaknesses in pacing, and Haylah’s overdone self-deprecating humor undermines the central message of size acceptance, which is mentioned a great deal but not fully explored. Without body-positive role models, the resolution is boiled down to a simple makeover and excessive jokes at her own expense. Most characters are cued as White; Kas is a Polish immigrant, and Leo is Black.

This coming-of-age comedy is frothy, if uneven, fun.