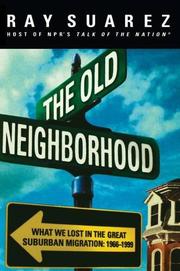 A fairly sophisticated description of the problem of urban flight from America’s largest cities over the last three decades. Suarez, noted radio journalist and host of NPR’s Talk of the Nation, is interested in providing what he terms a “dry-eyed” reevaluation of the suburban migration that has left our cities in their relatively impoverished condition today. Deftly juxtaposing statistical analysis, government reports, and personal oral narratives, he retells the story of urban flight to include the more malignant aspects of the phenomenon, which are often downplayed in accounts of how our older cities got into the “mess” we perceive them to be in. He foregrounds race as one of the primary factors in the migration by noting that the fastest-growing urban areas are precisely those which are becoming the whitest. He also views the unwillingness of many churches to take a more active role in saving neighborhoods, and the union-busting potential of relocating urban industrial activities to the suburbs, as contributors to the population drain from our largest cities. Many efforts at reform seem to exacerbate the situation—property tax abatements to draw young professionals into urban residential neighborhoods may impoverish local public schools, for example. Complicity between insurance companies, mortgage bankers, and investment firms to avoid doing business in minority neighborhoods also frustrates efforts at revitalization. Conversion of public housing projects into smaller, lower-impact, more widely dispersed units seems to be one of the few feasible alternatives to help ameliorate the situation. While Suarez bemoans the homogeneous suburban sprawl that has resulted from the migration and its tendency to isolate its inhabitants in an automobile culture, he doesn—t really offer useful suggestions for facilitating a return to the coherence and stability of the postwar urban residential community. Well done, but it’s a shame Suarez doesn’t match his narrative of loss with potential scenarios for recuperation.