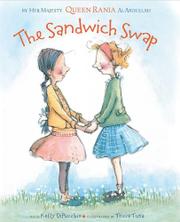 Like all best friends, Lily and Salma do everything together: They draw pictures, play on the swings, jump rope and eat lunch together. But Lily eats a peanut-butter–and-jelly sandwich while Salma eats a hummus-and-pita sandwich. Each girl thinks the other’s looks yucky! When they say so, the friendship splits, schoolkids take sides and someone yells FOOD FIGHT! Salma and Lily feel ashamed, especially when they are called into the principal’s office. The next day they sample each other’s sandwiches and declare them delicious. They go to the principal’s office again, this time with an idea to share—a gatefold depicts a long picnic table overflowing with ethnic food and happy kids. Tusa’s whimsical illustrations spice up the story. Her large, vivacious drawings contribute character and comic touches, especially to the food fight, but there is one notable omission in this story of cultural understanding: Absent from the picnic table’s array of flags identifying ethnicities (which include Iceland, Greece and Mexico among others, in addition to the United States and Jordan) is the Israeli flag—a hugely sad missed opportunity. (author’s note) (Picture book. 4-7)