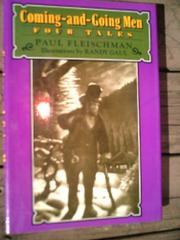 Silhouette cutter Cyrus Snype, skilled at reading character in his subjects' shadowed profiles, travels the country in search of the devil, whom he blames for destroying his once-illustrious career. In New Canaan, Vermont, Snype is hired by a parsimonious tanner to Fred an honest woman for the tanner to wed; but the innocent girl he selects is certain that Snype is the devil himself. (Doesn't he collect people's souls with their shadows, and keep them in his scrapbook?) The cross purposes of this trio leads to further entertaining complications in "The Shade Cutter," the first of Fleischman's four proficiently turned tales about traveling men who pass through New Canaan in the year 1800. The second story, about a candle-maker's apprentice sent out to shoot crows, is enjoyably creepy. Toward the end, the apprentice learns from a ballad seller's song the terrible reason for his master's obsessive war with crows. One can easily imagine Fleischman himself as a coming-and-going man, fabricating his way through his storybook Early America and enthralling the populace with his illusionist's wordcraft.