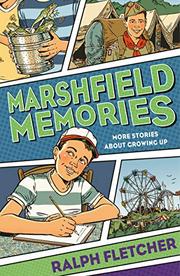 More Stories About Growing Up

A second set of childhood memories from the author of Marshfield Dreams (2005)—these spun around the feeling of being an “in-betweener” in his family as eldest of eight (later nine) siblings.

Fletcher opens with an elaborate neighborhood map (“Marshfield was my Middle-earth,” he writes) and goes on in short chapters to recall the pleasures—and sometimes tribulations—of being a Boy Scout, playing marbles, joining a muddy scramble to gather a bucket full of frogs, having the house to himself for a day, getting a pocket transistor radio, and like treasured moments around age 10. Other memories, such as learning that a Sunday school acquaintance who shared his love for chocolate Necco Wafers had died and seeing his school bus driver Ruben Gonsalves silently watch his son get slapped (wondering since if the 1964 incident would have even happened in his “white town…but for the color of their skin”), spark more complex responses. In an epilogue he tallies other less halcyon memories, capped by the later death of a brother covered in greater detail in the previous volume. Still, like the mock funeral his friends gave him when he and his family moved away from Marshfield, readers will find these reminiscences “sad, funny, a little weird, and very sweet.”

Engaging episodes, not beyond the ken of the current generation and lit with just enough sentiment to give them a warm glow.