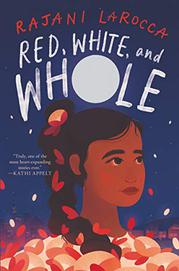 Monday through Friday, she goes to a school where she stands out for not being White but where she has a weekday best friend, Rachel, and does English projects with potential crush Pete. On the weekends, she’s with her other best friend, Sunita (Sunny for short), at gatherings hosted by her Indian community. Reha feels frustrated that her parents refuse to acknowledge her Americanness and insist on raising her with Indian values and habits. Then, on the night of the middle school dance, her mother is admitted to the hospital, and Reha’s world is split in two again: this time, between hospital and home. Suddenly she must learn not just how to be both Indian and American, but also how to live with her mother’s leukemia diagnosis. The sections dealing with Reha’s immigrant identity rely on oft-told themes about the overprotectiveness of immigrant parents and lack the nuance found in later pages. Reha’s story of her evolving relationships with her parents, however, feels layered and real, and the scenes in which Reha must grapple with the possible loss of a parent are beautifully and sensitively rendered. The sophistication of the text makes it a valuable and thought-provoking read even for those older than the protagonist.

An intimate novel that beautifully confronts grief and loss.