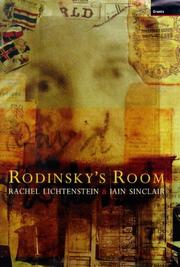 Fascinating tale of Jewish mystic-hermit David Rodinsky, whose London room is opened up after nearly 20 years, by artist Lichtenstein and with contributions by author Sinclair (Downriver, 1993).

The term quirky doesn't come close to describing this work, which blends Lichtenstein's autobiography, her biography of Rodinsky, a social history of London's Jewish immigrant neighborhood, and Sinclair's critical look at Lichtenstein's attempts to discover the truth about herself and Rodinsky. Lichtenstein begins the story with her attempts to discover what she can of her family's immigrant past in the London neighborhood of Spitalfields, and then is quickly engrossed by the story of David Rodinsky, who was legendary in his neighborhood for his seeming disappearance. Rodinsky's room was left exactly as he had last left it—a small garret above a synagogue, filled with notebooks in a number of languages, religious texts, and his personal effects. From this room, Lichtenstein's journey to discover what she can of this strange man spirals outward to encompass a cross section of London's Jewish community and takes her to Israel, a shtetl in Poland, and just about anyone who ever remembered Rodinsky. Lichtenstein's intensely personal writing is first-rate, and she quickly creates a stirring portrait of Rodinsky as a man who suddenly found himself alone in his room as London's Jewish community moved away from his surrounding neighborhood. Less interesting are the chapters by Sinclair, which are interspersed throughout the work and serve to distract from a story that is intrinsically one of Lichtenstein and Rodinsky. As Lichtenstein discovers more and more of Rodinsky, her mission becomes less to discover the man than to discover his place of burial and to put his soul to rest through telling his story and saying Kaddish over the grave.

Flawed in structure but beautifully written and completely captivating. (photos)