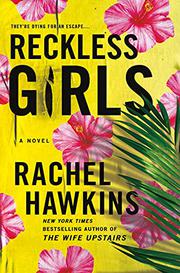 San Diego waitress Lux McAllister has led a joyless existence since quitting college to care for her dying mother, so when hunky customer Nico Johannsen invites her to sail the seas with him aboard his new boat, the Susannah, she accepts. They arrange to rendezvous in Hawaii after Lux ties up some loose ends, but when she gets off the plane, she learns the vessel sustained damage en route. Nico can’t afford the repairs, so rather than living aboard the Susannah as planned, the pair starts crashing in a cramped house with four other people while Lux cleans hotel rooms to make ends meet. When adventure-seekers Brittany and Amma, both 22, offer Nico $50,000 to rent a boat and take them to Meroe Island—an uninhabited Pacific atoll with a gruesome history—Lux extends a counteroffer: pay to fix the Susannah, and the four of them will spend two carefree weeks exploring the place together. Though the voyage proves harrowing, Meroe is stunning, and they bond instantly with wealthy, hedonistic fellow travelers Jake and Eliza, whose catamaran is in the harbor when they arrive. As the days stretch on, however, tension mounts, and the group’s idyllic existence takes a dark turn. Evocative prose and a palpably foreboding atmosphere complement Lux’s present-tense narration, which Hawkins studs with flashbacks exposing the secrets, lies, and betrayals that brought each character to this point. Danger and interpersonal drama abound, with a slew of outrageous twists adding to the fun.