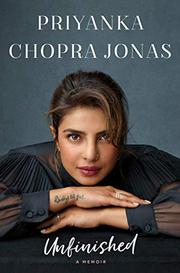 An internationally famous actor, singer, and producer takes stock of her life.

The daughter of army physicians, Chopra Jonas grew up on military bases throughout India. “Reinvention, adjusting and acclimatizing to new environments, overcoming fear of new places by opening up to possibility—these are some of the principles by which I have lived my life,” she writes. One of the most traumatic tests of her adaptability occurred when she was sent to boarding school at the age of 7; she writes about how she felt abandoned, lonely, and afraid. However, the independence she developed served her well later: In 1995, she embarked on her “first trip abroad,” to visit relatives in Iowa. She decided to stay in the U.S. for high school, where she reveled in the freedom of American teenage culture, but she returned to India after a few years. Although Chopra Jonas aspired to become an aeronautical engineer, her life changed dramatically when her mother submitted her photos to a Miss India World contest. To her astonishment, she won the title and went on to become Miss World in 2000. Movie offers followed: For almost a decade, she made four films per year, working long days and devoting herself to learning how to act and how to navigate the patriarchal Bollywood industry. Making the transition to American movies was challenging both professionally and emotionally, and she was shocked when she received racist hate mail and tweets. Nevertheless, her career in the U.S. took off when she was offered the lead role in the series Quantico. The author recounts her depression after her father’s death, her whirlwind romance with Nick Jonas, and her humanitarian work as a global ambassador for UNICEF and as an advocate for children and girls. She is committed, she writes, “to get the attention of people and direct it to conditions or situations that cry out for change.”

A lively memoir from a hardworking entertainer.