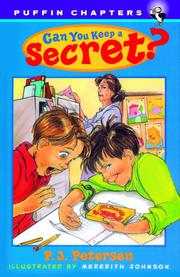 CAN YOU KEEP A SECRET?

A lighthearted tale about a boy intent on becoming trustworthy, from the author of White Water (p. 805). Mike is well liked by his sixth-grade classmates because he is kind and thoughtful, but he has a reputation for giving away secrets. He's not malicious; the secrets come out through his well-intentioned helpfulness, or his face gives him away. The comments of his classmates—e.g., ``He'll tell the whole school''—bother him so much that when he becomes party to several secrets, including some important ones, he is determined to prove that he can keep them. Unfortunately for readers, he keeps some of the secrets by lying, and Petersen doesn't address that. Nevertheless, his tone is gentle throughout, and the novel is one that could prompt good discussions. (b&w illustrations, not seen) (Fiction. 7-10)