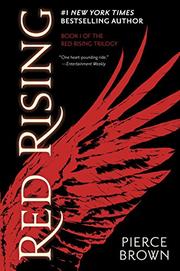 Set in the future and reminiscent of The Hunger Games and Game of Thrones, this novel dramatizes a story of vengeance, warfare and the quest for power.

In the beginning, Darrow, the narrator, works in the mines on Mars, a life of drudgery and subservience. He’s a member of the Reds, an “inferior” class, though he’s happily married to Eo, an incipient rebel who wants to overthrow the existing social order, especially the Golds, who treat the lower-ranking orders cruelly. When Eo leads him to a mildly rebellious act, she’s caught and executed, and Darrow decides to exact vengeance on the perpetrators of this outrage. He’s recruited by a rebel cell and “becomes” a Gold by having painful surgery—he has golden wings grafted on his back—and taking an exam to launch himself into the academy that educates the ruling elite. Although he successfully infiltrates the Golds, he finds the social order is a cruel and confusing mash-up of deception and intrigue. Eventually, he leads one of the “houses” in war games that are all too real and becomes a guerrilla warrior leading a ragtag band of rebelliously minded men and women. Although it takes a while, the reader eventually gets used to the specialized vocabulary of this world, where warriors shoot “pulseFists” and are protected by “recoilArmor.” As with many similar worlds, the warrior culture depicted here has a primitive, even classical, feel to it, especially since the warriors sport names such as Augustus, Cassius, Apollo and Mercury.

A fine novel for those who like to immerse themselves in alternative worlds.