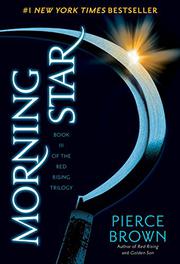 Brown completes his science-fiction trilogy with another intricately plotted and densely populated tome, this one continuing the focus on a rebellion against the imperious Golds.

This last volume is incomprehensible without reference to the first two. Briefly, Darrow of Lykos, aka Reaper, has been “carved” from his status as a Red (the lowest class) into a Gold. This allows him to infiltrate the Gold political infrastructure…but a game’s afoot, and at the beginning of the third volume, Darrow finds himself isolated and imprisoned for his insurgent activities. He longs both for rescue and for revenge, and eventually he gets both. Brown is an expert at creating violent set pieces whose cartoonish aspects (“ ‘Waste ’em,’ Sevro says with a sneer” ) are undermined by the graphic intensity of the savagery, with razors being a favored instrument of combat. Brown creates an alternative universe that is multilayered and seething with characters who exist in a shadow world between history and myth, much as in Frank Herbert’s Dune. This world is vaguely Teutonic/Scandinavian (with characters such as Magnus, Ragnar, and the Valkyrie) and vaguely Roman (Octavia, Romulus, Cassius) but ultimately wholly eclectic. At the center are Darrow, his lover, Mustang, and the political and military action of the Uprising. Loyalties are conflicted, confusing, and malleable. Along the way we see Darrow become more heroic and daring and Mustang, more charismatic and unswerving, both agents of good in a battle against forces of corruption and domination. Among Darrow’s insights as he works his way to a position of ascendancy is that “as we pretend to be brave, we become so.”

An ambitious and satisfying conclusion to a monumental saga.