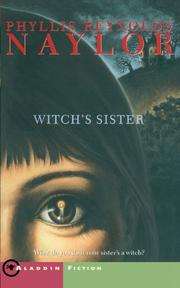 Lynn is sure that her sister Judith, who spends a mysterious lot of time taking sewing lessons from morbid old Mrs. Tuggle on the hill, is a witch, and when the girls' parents take a weekend trip, calling in Mrs. Tuggle as resident sitter, on just the night that witches are said to take the blood of infants for their spells, Lynn is terrified for her little brother Stevie. The circumstantial evidence mounts, culminating in a midnight struggle — but when Mother, a writer, returns, she tells of an ending she has invented for the story that Lynn's suspicions have inspired: "At the very end, in a horribly scary scene with the old woman and Ann (Lynn) alone together, their two shadows mingling in the light of the candle, Ann discovers that it is not really Elsie (Judith) after all who is becoming a witch, but she herself; and when she looks in the mirror, she sees instead the face of the old woman." An underhanded way perhaps to work a trick ending the author herself would reject into a story that had to have one, but it does get the point across to Lynn — and to readers who will at times be half convinced that she's right.