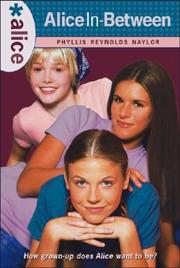 From the Alice McKinley series, volume 9

The fifth book about Alice slips comfortably into formula, but fans of the motherless preteen(now completing seventh grade) won't object. It's not only Alice who's pausing on the verge of a next phase; her brother Lester, 20, is still happily enamored of the same two young women; and Dad's romance with Alice's teacher is still tempered by his wife's memory. Meanwhile, Alice and friend Pamela test their dawning maturity. Alice dresses up for a 13th birthday-gift evening with Lester, during which they rescue his friend Crystal from an obnoxious pickup; more threateningly, when Alice, Pamela, and their timid friend Elizabeth take a sleeper to visit Aunt Sally, an older man takes Pamela's grownup pose all too seriously. But on the whole Alice is comfortable being neither a child nor an adult; "I was sort of between problems," she observes, and it's a pleasure to visit her in this unwontedly tranquil state. Still, a casual but unexpectedly warm kiss from old friend Patrick at book's end suggests that the new teenager — as thoughtful and lively as ever — will soon be on to the next stage. (Fiction. 10-14)