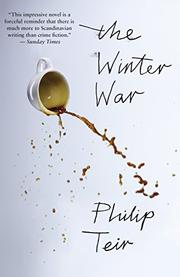 The cycle of satisfaction, frustration, creation, and ennui that dogs artists and scholars alike unfolds in two generations of a Helsinki family.

Max, a sociologist known for his decadeslong work on sex, is turning 60 and struggling to produce a biography of a groundbreaking 19th-century Finnish writer as his legacy. But it’s not just professional respect Max craves; when a young journalist interviews him, “above all, [Max] hoped that he was still sexy.” His marriage to his wife, Katriina, is stale after they’ve raised two grown daughters. Katriina resents that while Max is thinking about a book that never materializes, there’s not much hope he will “show an interest in something other than himself.” She dreams of what she’d like to do for the next 30 years of her life, but what brings her pleasure elicits little interest from her husband. Their younger daughter, Eva, puzzles most of the family when she moves to London to study art—only Max has always predicted this path for her. Yet both Max and Eva are unhappy; Eva questions the meaning of what she does under the tutelage of a burned-out professor with whom she has an affair as her father has a dalliance with the journalist. Eva thinks she will grow into happiness, reflecting that “when her father was her age, he’d already written his doctoral dissertation.” The other Paul sister, Helen, chose a more traditional path as a teacher and mother and often serves as the family observer. When Max’s mother suffers a crisis, bringing the four together, Helen sounds a note reminiscent of Tolstoy: “every family experienced similar scenes that had to be endured, other hospitals with ill relatives, other small towns where a grandmother had suffered a stroke.”