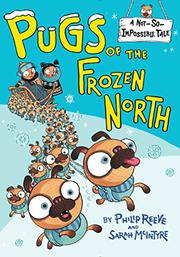 PUGS OF THE FROZEN NORTH

From the Not-So-Impossible Tales series, volume 3

Two kids and their 66 pugs enter a magical dog-sled race.

The Cakes in Space (2015) team returns for a ridiculous winter adventure story. When the ocean freezes solid right underneath their boat—and also freezes the boat itself—the Lucky Star’s crew faces tough decisions. Shen’s left behind with their cargo of 66 pugs. He finds a nearby town and learns that the frozen ocean’s caused by True Winter, a once-in-a-lifetime event heralding a race to the top of the world—the winner gets a wish from the Snowfather. Shen and Sika hitch the pugs to her elderly’s grandfather’s sled—he nearly won last True Winter, and Sika’s wish is for him to become well and live long enough to race again. The wacky competitors include a villainous Brit who loves to cheat (with tricks like the classic misleading detour sign). The obstacles on the race range from yetis (who have a noodle bar, because “Yeti Spaghetti Bar sounded too obvious”) to a Kraken. (McIntyre’s doofy, bug-eyed pugs are never more hilarious than in the glorious two-page spread where they battle the sea monster.) As the Snowfather can’t save Sika’s grandfather, the story’s silliness seamlessly transitions to musings about the immortality of stories and an old man’s positive end-of-life portrayal.

A madcap, magical blend of fluff and other good stuff.