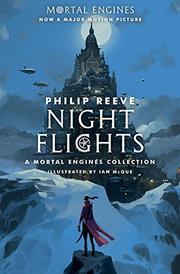 From the Mortal Engines Collection series

Finally, some illumination into the backstory of fan-favorite Anna Fang from the Hungry City Chronicles series.

Reeve (Black Light Express, 2017, etc.) offers up three vignettes into the history of the mysterious Anna Fang. “Frozen Heart” fleshes out her origins: A captured Anna mentally hardens herself in order to survive being a thrall, or slave, in Arkangel, a traction city. While scavenging, she spots two Jeunet-Carot engine-pods and plans her escape. In “Traction City Blues,” an adolescent Anna finds herself at odds with the Anti-Traction League and swears to strike out on her own, landing in London, where the local police may thwart her chances of obtaining a powerful weapon. Finally, in “Teeth of the Sea,” Anna learns the valuable lesson of not trusting anyone during a mission in Pulau Pinang. All three episodes showcase Anna’s quick thinking and resourcefulness, artfully taking advantage of situations rather than physically fighting out of them. Long devotees of the series may expect a bit more grittiness. Readers new to this world may want to pick up Mortal Engines (2003) before taking on this venture. Anna is Asian, there is diversity in the segment set in Malaysia, and characters in the other sections are not described in enough detail to determine ethnicity. Final artwork not seen.

Solid storytelling with engrossing adventures; fans will be grateful for a firsthand account from the elusive character herself.