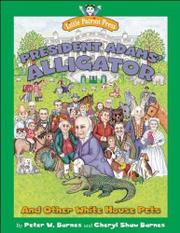 This tally of presidential pets reads like a school report (for all that the author is a journalist for Fox Business Network) and isn’t helped by its suite of amateurish illustrations.

Barnes frames the story with a teacher talking to her class and closes it with quizzes and a write-on “ballot.” Presidents from Washington to Obama—each paired to mentions of birds, dogs, livestock, wild animals and other White House co-residents—parade past in a rough, usually undated mix of chronological order and topical groupings. The text is laid out in monotonous blocks over thinly colored scenes that pose awkwardly rendered figures against White House floors or green lawns. In evident recognition that the presidents might be hard to tell apart, on some (but not enough) pages they carry identifying banners. The animals aren’t so differentiated; an unnamed goat that William Henry Harrison is pulling along with his cow Sukey in one picture looks a lot like one that belonged to Benjamin Harrison, and in some collective views, it’s hard to tell which animals go with which first family.

The runt of the litter of print titles and websites covering the topic.