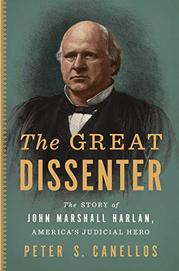 A thorough biography of the Supreme Court justice who famously said, “our Constitution is color blind, and neither knows nor tolerates classes among citizens.”

Canellos, the former executive editor of Politico, delivers the riveting story of a courageous Kentucky lawyer who initiated significant challenges to anti–civil rights measures during an era of ubiquitous bigotry. John Marshall Harlan (1833-1911) is remembered especially by his ringing Supreme Court dissents in three disgraceful cases passed by near unanimity: the Civil Rights Cases of 1883, focused on arbitrary discrimination by establishments; Plessy v. Ferguson in 1896, which established the “separate but equal” doctrine of Jim Crow segregation in public spaces for the next 60 years; and Lochner v. New York, a setback for labor legislation that would become especially troublesome during the New Deal. In 1876, Harlan was appointed to the Supreme Court by the recently elected president, Rutherford Hayes, who desired a Southerner for the post—though the Great Dissenter would prove to be a decidedly “eccentric” Southerner. Harlan grew up in a family that owned slaves, including his half brother, Robert, who built a successful career for himself as a freed man. Canellos shows how Robert, “horse-racing impresario, gold rush entrepreneur, financier of Black-owned businesses, world traveler, state representative, and leading Black citizen in Ohio,” had a profound impact on his brother. Despite the fact that the final postwar civil rights amendment had been ratified in 1870, by the time Harlan was appointed, the meaning of all of them was still unclear. Harlan was the lone voice insisting that a “legal revolution had been won on the battlefields of Shiloh, Antietam, Gettysburg, and Manassas.” His dissent “provided the only shred of faith in the system, the only real evidence that America wasn’t completely separating along color lines.” Given the recent heated debates about Supreme Court justices and civil rights legislation, this expert biography is especially timely and significant.

An impressive work of deep research that moves smoothly along biographical as well as legal lines.