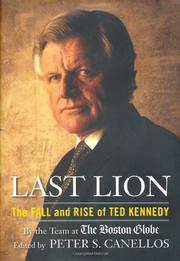 The Fall and Rise of Ted Kennedy

edited by Peter S. Canellos with The Team at the Boston Globe

A respectful but not stuffy portrait of Edward Kennedy, the playboy of legendary appetites turned senior statesman.

Upon learning last spring that Kennedy had been stricken with cancer, John McCain lauded him as “the last lion of the Senate,” adding that “he remains the single most effective member of the Senate if you want to get results.” By this account, assembled by Canellos and a team of seasoned reporters from the Boston Globe, McCain’s encomium seems right on the mark. Kennedy has been notable in pushing through a wide variety of laws and programs, particularly ones that concern health, education and workers’ rights. It was not always that way. The writers portray the early Kennedy—the last of four brothers and nine children, and often the target of withering criticism—as just shy of being a wastrel, ejected from Harvard for cheating on a Spanish exam and fond of the night life. A stint as an enlisted man in the Army—during which his father pulled strings to keep him from the battle lines in Korea—helped turn him around, but he still got arrested for reckless driving even as he was preparing to serve as his brother Jack’s campaign manager. Thrust into the family trade, Kennedy “walloped his Republican opponent, grabbing three-quarters of the vote” in the 1964 Senate race, and he slowly began to build a résumé as a serious, studious politician—a reputation blunted but not squashed by scandals such as Chappaquiddick. Most striking about this sturdy account is Kennedy’s well-practiced habit of crossing the aisle to disarm his Republican opponents with a combination of charm and arm-twisting. One unlikely ally was Sen. Orrin Hatch (R-Utah), who came to Congress with a specific agenda of fighting Kennedy on every front. Another was President George W. Bush, whom Kennedy aided in pushing through the No Child Left Behind legislation—though he later “blamed Bush for reneging on his side of the bargain.”