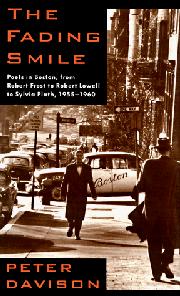 Poets in Boston, from Robert Frost to Robert Lowell to Sylvia Plath, 1955-1960

A pedestrian look at the postwar Boston poetry scene by a lesser poet filled with his own self-importance. With the possible exception of San Francisco, Boston in the late 1950s was home to more of the nation's poetic talent than any other city. The number of major talents either residing there or passing through certainly warrants a cultural history, but this isn't it. Davison, longtime poetry editor of the Atlantic Monthly, attempts an insider's look into the lives of such figures as Sylvia Plath, Robert Lowell, Richard Wilbur, and Stanley Kunitz, all of whom he continually upstages. He ends a chapter on Anne Sexton, for example, by quoting one of his own poems in its entirety—in a book that generally quotes sparing snippets of verse. Of most value is the first chapter, which details the rise and demise of the Poets' Theatre of Cambridge, which commissioned new works by poets and gave them a stage. The rest of the text coasts superficially through everyone's life and work; the literary gossip is stale, poetic analysis almost absent. Everything but Davison's own career, which occupies a long second chapter, is treated in shorthand; even the glaring sexism of the Boston poetry scene is simply mentioned and dismissed. The coverage of women poets is particularly ungenerous and snippy; the chapter on Adrienne Rich ends with the unsupported observation, ``Though no poet of this period expended more agony on the will to change, others may well have more completely succeeded.'' Perhaps the central unanswered question of the period is the one posed by Richard Wilbur: ``A lot of people were falling apart and preparing to die, and I wonder to what extent that is really unrelated to choice of literary style.'' Don't look for answers here. (16 b&w illustrations)