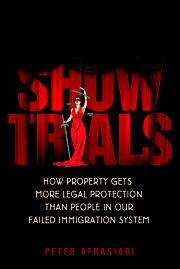 A highly organized, informative discussion of the immigration system in the United States.

In this politically charged environment, Afrasiabi manages to broach the volatile issue of immigration in a well-rounded, surprisingly effective framework that combines case studies, historical research, statistical analysis and personal anecdotes to detail the current issues and propose solutions. Invocations of Kafka, “The Twilight Zone” and “Alice in Wonderland” prove warranted as illustrations of the often surreal circumstances that confront immigrants facing deportation. Immigrants usually lack access to quality legal representation, while their situation can be made doubly difficult due to language barriers and significant cultural differences. Afrasiabi incorporates his work with colleagues and students at the Chapman University School of Law to deftly weave together the facts of several compelling cases and their underlying legal issues, with a genuine sense of suspense as readers wonder if justice will be truly be served. Occasionally, though, the narrative becomes overwrought—two federal laws passed in 1996 are “dark storm clouds depositing their sleet”—although, considering the life-changing effects of court decisions, it’s difficult to overstate the ramifications: extralegal rendition of individuals with pending cases and the de facto deportation of native-born children whose parents are deported. Afrasiabi also addresses the legacy of various anti-alien laws in California, as well as marriage equality for same-sex couples when one partner is a noncitizen. As the subtitle asserts, Afrasiabi employs his additional experience in the field of property law to contrast the stark differences between immigration judges and constitutional judges, like their qualifications, vetting processes and even the oaths they take. His arguments culminate in seven concrete reforms proposed in the conclusion. In order to make the immigration system more just and effective, Afrasiabi claims the solutions are closer than we may think; we can implement procedures and safeguards already in place within the constitutional courts.

A persuasive, valuable addition to the ongoing immigration reform debate.