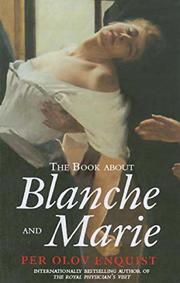 THE BOOK ABOUT BLANCHE AND MARIE

by Per Olov Enquist & translated by Tiina Nunnally

The ordeals and sacrifices of two remarkable women are analyzed with penetrating intensity in the Swedish master’s latest.

Following the method employed throughout his oeuvre, and with particular success in his recent fictions The Royal Physician’s Visit (2001) and Lewi’s Journey (2005), Enquist connects his own history and sensibility to the stories of Nobel Prize–winning physicist Marie Curie and her ill-fated research assistant (and eventual soulmate), Blanche Wittman. Those stories are told in three “Books” composed by Blanche after her lethal exposure to radiation, both during Mme. Curie’s experiments and in earlier years when she was a patient treated for “hysteria” by eminent neurologist J.M. Charcot, and also his assistant, then his adulterous lover. Moving backward and forward in time, Enquist presents Blanche’s ruminations on her treatment at Saltpêtriére Hospital (a filthy, overcrowded “black castle in the middle of Paris”), where she became a de facto emblem of the “madness” of love; Polish-born Marie Curie’s self-destructive affair with a married scientist, which evoked outraged anti-Semitic protests and drove her from France; and the sad final years of both women, when Marie became a disgraced outsider in the land where she had earned unprecedented honors, and Blanche a (still sentient, forever impassioned) torso “living” in a wooden cart. In a masterly display of concision, Enquist packs an imposing enormity of historical and scientific information into a searching exploration of the phenomenon of love; a complex meditation on the riddles that challenge his characters’ ingenuity—how do we manage to love, given the fragility and impermanence of the body, and how can human emotion and experience be measured and quantified, much less comprehended?

The result is a reading experience that carries the impact of an Ingmar Bergman film based on a novel by Thomas Mann. It’s astonishing, and it’s unforgettable.