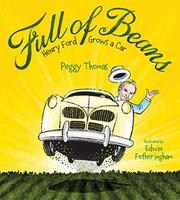 Henry Ford is well known for the Model T and the assembly line, but he made many other contributions to the economic health of the nation.

He was also concerned with finding ways to improve farming methods and ease the heavy burdens of farmers. He built reliable tractors from spare car parts. The Depression exacerbated existing troubles. Ford already recycled and repurposed nearly everything at his factory and thought that he could find new uses for farm crops as well. He created a laboratory and hired scientists to study grains, fruits, and vegetables, and they finally determined that soybeans were the answer. The team developed soybean-based paint, fabric, and lightweight plastic that could form most of the parts for his cars. The vast amount of soybeans needed kept hundreds of farmers solvent and even prosperous. After Ford’s death, the soybean continued to be converted into dozens of products way beyond his initial plan. Thomas presents the facts as if in direct conversation with readers, with clear and accessible explanations. Fotheringham’s boldly hued, action-packed digital illustrations are bright and cheery; they depict an all-white cast. Extensive backmatter includes further information on Ford and soybeans, two recipes, a timeline, and further resources. Absent from both it and the primary story is any reference to Ford’s virulent anti-Semitism.

A fascinating if focused look at an inventor and innovator who changed America.