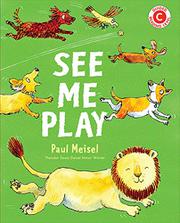 In Meisel’s latest dog-themed early reader (See Me Dig, 2013, etc.), a pack of determined dogs chases after a yellow tennis ball by using a hot air balloon, a speedboat, and a pink convertible.

The simple, predictable text uses just four or five words per double-page spread, with elementary sentence structures that are accessible to new readers. The story begins with an olive-skinned human (shown only from the shoulders down) ready to throw the ball for the waiting dogs. Several sentences are repeated with the change of just one word as the ball is taken in turn by a bird, a whale, and a lion. The amusing canines can conjure up whatever help they need in their joint effort, taking off in a hot air balloon to chase after the bird, zooming across open water in pursuit of the whale, and speeding after the lion in their sporty pink convertible. The smiling lion suddenly stops and swallows the ball, ending the chase. The concluding page finds the playful pups whisked back home where they started, with the human character now ready to throw a stick. The illustrations provide plenty of motion, appealing animal characters, and funny details such as the tennis ball clenched in the whale’s jaws.

A humorous and effective early reader that meets the standard set by this successful series.