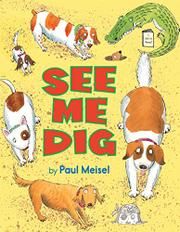 In this gem of an early reader, a cast of cavorting canines find more than they expected when they start digging—namely a scary bear, buried treasure, pirate ghosts and heavy construction equipment.

Meisel follows his first title in this series (See Me Run, 2011) by using the same dog characters and limited first-grade-level vocabulary for kids just beginning to read on their own. This time, the endearing dogs dig up a huge box buried in the sand after the bear chases them away from the forest. In a surprise twist that will tickle young readers, the enormous chest contains not gold coins, but the ghosts of pirates who chase after the dogs until one brave pup stands up to the ghosts with a big bark. But there’s another danger looming: the clawlike tines on the bucket of a tracked excavator appear to threaten the dogs, until excavator and dogs find that they can all dig in the sand together, side by side. Using just a few words and extremely short sentences, Meisel delivers a funny story with a real plot containing several surprises. His cartoon-style illustrations in watercolor with pen-and-ink and pencil details capture the canine personalities and create deliciously spooky (but not really scary) villains in the pirate ghosts.

New readers will dig this.