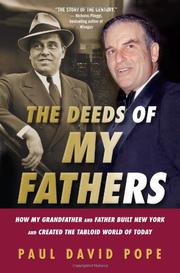 THE DEEDS OF MY FATHERS

Inside story of the controversial Italian-American family that gave us the Italian-language daily Il Progresso and the National Enquirer.

In writing this admiring account of his grandfather Generoso (1891–1950) and father Gene (1927–1988)—“two titans” who “changed America”—Pope relied on more than 500 interviews as well as extensive research done for several unpublished books on the family and its enterprises, including two projects commissioned and later aborted by his father. The result is a richly detailed tale of businessmen, mobsters and politicians that reads like a soap opera written by Mario Puzo. Beginning with Generoso’s arrival in New York in 1906, at age 15, with little money, the author tells a multigenerational story in which the immigrant started out as a laborer in Long Island’s sand pits, pursued his belief that “America is a place of dreams coming true” and created a hugely successful building-supply company during New York’s 1920s skyscraper boom. He received help from shady characters and shrewd operators, including mobster-friend Frank Costello and attorney Roy Cohn, who provided strong-arm and deal-making expertise in return for favors. The author writes that Gene later distanced the family from mobsters while making the Enquirer a national tabloid and ushering in the era of celebrity journalism. Patriarch Generoso emerges as a savvy opportunist who obtained dirt on his opponents to get his way. His favoring of like-minded Gene over two older sons created long-lived animosities within the family. Gene’s mother even told him, “You are the abortion I should have had.” Throughout the book, Pope provides engrossing stories about Il Progresso’s influence in New York and national elections, the long battle to win a place for the sensational Enquirer at supermarket checkouts and Gene’s tyrannical insistence on concocting gripping articles for the tabloid’s millions of readers. Also included are portraits of Mussolini, Frank Sinatra, A.J. Liebling, Carlo Tresca, Joe Bonanno and Joe Profaci.

Readable and revealing, and the vividly re-created scenes cry out for film treatment.