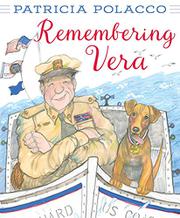 A stirring tribute to an abandoned dog who became a Coast Guard hero.

Inspired by true stories about a dog she actually met in the 1960s, Polacco’s dramatic tale features two nautical rescues in which Vera—an unofficial (at first) mascot on what is now called Coast Guard Island in the San Francisco Bay area—played significant, lifesaving roles. Midsized, flop-eared, and wholly winning, Vera is surrounded in the ink-and-marker illustrations with adoring sailors of diverse skin tone who eagerly adopt her as a puppy in an early illustration, though her reception by the commander is not so assured. With her nautical heroics she eventually even wins over the base’s crusty, cigar-chomping “Ol’ Man.” The author herself comes into view years later when, as a Society for the Prevention of Cruelty to Animals worker, she witnesses the old dog’s last days and formal military burial beneath a memorial of crossed anchors. Though some, maybe all, of the dialogue is invented (“ ‘Cast off, mates—lives hang in the balance!’ he bellowed”), a closing photo taken on a recent visit to the island attests to the memorial’s existence, and Polacco’s account of her search for it makes a mildly suspenseful coda.

A fitting addition to the annals of doggy courage.