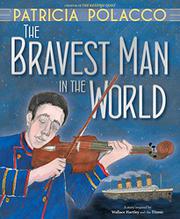 THE BRAVEST MAN IN THE WORLD

A tribute to Wallace Hartley, the bandleader who played on as the RMS Titanic was sinking.

When young Jonathan complains that piano practice is “sissy stuff,” his grandfather responds with the tale of how, as a 9-year-old stowaway on the Titanic, he was taken in by the friendly Hartley—who was so impressed by the lad’s talent that he arranged an onboard audition before John Jacob Astor that later led to a life in music. First, though, comes that night to remember (or as Polacco unoriginally puts it, a “date that would live in infamy”), with its rending collision, general panic…and tearful separation as the child reluctantly boards a lifeboat while Hartley remains on deck, playing “Nearer, My God, to Thee” for those doomed to stay behind. “Can you imagine the majesty and harrowing strength…the limitless bravery in that man’s heart,” the storyteller declaims. The musicians who, with like courage, joined Hartley on that fateful night are just dim figures in the background, but the illustrations bring the disaster’s terror and tragedy into sharp focus on the expressive faces of the young stowaway and other passengers and crew (all white). Readers will come away appreciating Hartley’s fortitude and may be equally moved by the closing note (with photos) that his violin, miraculously, was later recovered along with his body.

A stirring example of “grace under fire” (writes the author, mangling another meme), commemorated in rhapsodic but not unsuitable language.