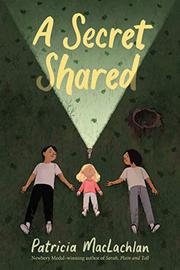 The White family’s ancestry is European: Mother, a newspaper columnist, is Irish; Father, an art professor, is Italian. When Mother administers a home DNA test for her column about ancestry, Birdy copies her, preparing a test for herself using the kit Father rejects. When the results come back, the twins realize Birdy substituted her sample for Mother’s and that Birdy’s ancestry is Swedish. Confused, the twins confide in a former teacher who asks them if it matters. They decide it doesn’t but continue to probe the mystery; meanwhile, Mother makes weekly trips to place flowers on her best friend’s grave. The tale unfolds gently, with MacLachlan’s signature grace and luminous simplicity, but the complex subject—poised where nature and nurture intersect—both calls for and deserves more nuanced treatment than plot or format allow. Even though Birdy’s atypical adoption sidesteps difficult issues, young readers may wonder why Birdy’s birth mother made her choice and why her birth father’s unknown. Overall, the story has a comfortably old-fashioned sensibility, but the depiction of adoption, understandably simplified, is also outdated, conflating problematic adoption secrecy with secrets trivial and benign. Beyond outing family secrets, DNA testing has given parentage and ancestry renewed prominence in how we identify ourselves. The message that, in a loving family, being adopted “doesn’t matter,” while well-intentioned, is misleading.

A rare misstep from a first-rate author.