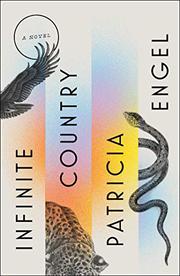 A 15-year-old girl in Colombia, doing time in a remote detention center, orchestrates a jail break and tries to get home.

"People say drugs and alcohol are the greatest and most persuasive narcotics—the elements most likely to ruin a life. They're wrong. It's love." As the U.S. recovers from the repeal of the Deferred Action for Childhood Arrivals program, from the misery of separations on the border, from both the idea and the reality of a wall around the United States, Engel's vital story of a divided Colombian family is a book we need to read. Weaving Andean myth and natural symbolism into her narrative—condors signify mating for life, jaguars revenge; the embattled Colombians are "a singed species of birds without feathers who can still fly"; children born in one country and raised in another are "repotted flowers, creatures forced to live in the wrong habitat"—she follows Talia, the youngest child, on a complex journey. Having committed a violent crime not long before she was scheduled to leave her father in Bogotá to join her mother and siblings in New Jersey, she winds up in a horrible Catholic juvie from which she must escape in order to make her plane. Hence the book's wonderful first sentence: "It was her idea to tie up the nun." Talia's cross-country journey is interwoven with the story of her parents' early romance, their migration to the United States, her father's deportation, her grandmother's death, the struggle to reunite. In the latter third of the book, surprising narrative shifts are made to include the voices of Talia's siblings, raised in the U.S. This provides interesting new perspectives, but it is a little awkward to break the fourth wall so late in the book. Attention, TV and movie people: This story is made for the screen.

The rare immigrant chronicle that is as long on hope as it is on heartbreak.