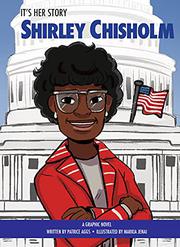 From the It's Her Story series

“Fighting Shirley” was no ordinary politician.

The story opens in Barbados, where Shirley Chisolm spent a relatively carefree early childhood with her sister, Muriel, on their grandparents’ farm. Upon being sent to live with her parents in Brooklyn, Shirley had to adjust to much stricter household rules. She excelled academically throughout her school years, and after graduating from Brooklyn College, began her teaching career in early childhood education. As an administrator of child care centers, Chisolm devoted herself to child welfare and community affairs. Her work put her in touch with the needs of working people and their families, and she labored ceaselessly to get candidates elected who would make meaningful changes. Eventually, she decided to run for office herself and became the second Black woman elected to the New York Assembly and, after that, the country’s first Black congresswoman. Aggs relates how Chisholm dedicated her efforts to improving the lives of her constituents, often finding herself at loggerheads with colleagues. Chisholm’s boldness and desire for change led her to seek the Democratic Party nomination for president of the United States. Although she was unsuccessful, her groundbreaking campaign was a momentous sociopolitical event. This lively, optimistic biography is an accessible introduction to Chisholm’s life for younger readers, highlighting her determination to stay true to herself and her ideals. The illustrations aren’t particularly original, but the colorful panels effectively propel the narrative.

An interesting portrait of an American mover and shaker refreshingly presented in graphic novel format.