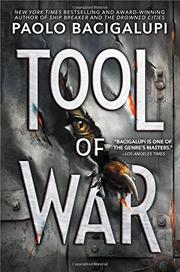 Bacigalupi returns to probe his brutal, post-apocalyptic American landscape and darkly provocative characters in this third installment of the series begun in Ship Breaker (2010) and continued in The Drowned Cities (2012).

Following the pattern of existential fracture found in its predecessors’ narratives, this latest novel further explores the consequences of war and corruption with a focus on the DNA–spliced “augment” called Tool. Tool (also called Blood, Blade, and Karta-Kul the Slaughter-Bringer) is a finely honed weapon, bred for massacre, survival, and loyalty. But after breaking free of his conditioned servitude, Tool represents a serious threat to his former masters, who attack with everything available in their considerable arsenal to destroy him lest they be forced to face the terrifying question of what happens when a weapon turns on its creators. For Tool was uniquely designed for more than just the tactical strategy and lethal bloodlust of most augments—he has a power that, now unleashed, could spell the end for a violently factionalized, inhumanly cruel humanity. Told in third person, the novel alternates among the perspectives of several new as well as familiar characters, none of whom shy away from the constant gore and near-paralyzing moral complexities of their war-torn existence. After playing fascinating, catalyzing roles the first two books, Tool is at center stage at last as readers move through Bacigalupi’s exploration of the intricate relationships connecting hunter and prey, master and enslaved, human and monster.