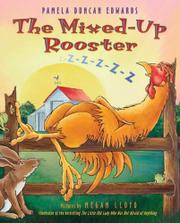 Ned just cannot arise in time to herald the dawning of each new morn. As he continually misses his deadline, the rather demanding hens with which he lives harass him about adversely affecting their work. Unfortunately, Ned is more of a night owl, so to speak. Once egg production drastically decreases due to the oversleeping layers, the seriously bottom-line hens kick Ned out of the coop. A new rooster who crows each morning is imported. That evening, sulky Ned is delighted to meet other nocturnal animals, such as bats, rabbits and frogs. After an enjoyable night frolic, Ned saves the day by sounding the alarm as a snake heads toward the henhouse. Ned and bossy Daisy Mae successfully scare away the predator. Ned gets a new job better suited to his biorhythms: night watchman. Cartoonish illustrations delight with sly details such as the curlers in the rooster’s tail and the red emergency phone in the henhouse used when egg production falls seriously below par. Young readers will be delighted that Ned and the surrounding animals work out a compromise that satisfies everyone. (Picture book. 3-6)