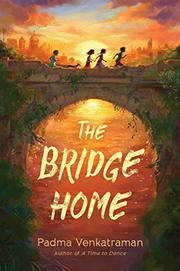 Eleven-year-old Viji and her sister, Rukku, flee their abusive father after he breaks Amma’s arm and kicks Rukku. They find themselves, overwhelmed, in the big city of Chennai, where they are temporarily employed by kind Teashop Aunty, who offers them bananas and vadais, and fall in love with a puppy, Kutti, who becomes their constant companion. The sisters meet Muthu and Arul, two boys who live under an abandoned bridge, and join them; Viji tells Rukku elaborate stories to reassure herself and her sister that they will be OK. Soon, Viji finds herself telling the young boys her stories as well; in return, the boys show the girls how to earn money on the streets: by scavenging for resalable trash in a very large garbage dump Muthu calls “the Himalayas of rubbish.” When tragedy strikes, it is this new family who helps Viji come to terms. Craftwise, the book is thoughtful: Venkatraman employs the second person throughout as Viji writes to Rukku, and readers will ultimately understand that Viji is processing her grief by writing their story. Viji’s narration is vivid and sensory; moonlight “slip[s] past the rusty iron bars on our window”; “the taste of half an orange…last[s] and last[s].” The novel also touches on social justice issues such as caste, child labor, and poverty elegantly, without sacrificing narrative.