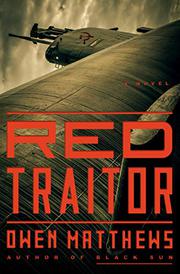 A fictionalized account of the Cuban missile crisis from the Soviet perspective.

Fresh from a triumphant case involving a Soviet nuclear superbomb, Alexander Vasin of the Special Cases directorate of the KGB is attempting to catch a high-level spy. Oleg Morozov of the GRU is believed to be passing secrets to the Americans, but all Vasin’s efforts to uncover the traitor have so far yielded nothing. Vasin feels a particular urgency to succeed because his own boss, Gen. Orlov, is locked in mortal bureaucratic combat with Morozov’s boss, Gen. Serov. As Vasin pursues his quarry, he uncovers evidence that the Politburo has authorized the shipment and installation of nuclear missiles in Cuba. In a separate plot development, a flotilla of four Soviet submarines, each one carrying a single nuclear torpedo in addition to its conventional torpedoes, is deployed toward Cuba. As Vasin uncovers more and more of this unsettling situation, he comes to believe that the American government needs to be informed, and he begins to try to use Morozov as a conduit. The discovery of the missiles in Cuba precipitates a diplomatic crisis, but cooler heads eventually prevail over the hawkish Soviet faction. The submarines, however, present another threat. Submerged and beyond communication, they do not require confirmatory orders to use their weapons, and when the U.S. “quarantine” corrals them, the possibility of a nuclear exchange looms. Matthews has done solid historical research—in many cases his characters bear the names of the actual participants—and the fictionalization is deft, but his need to represent all the moving parts detracts from the effect of the whole. Though the matter is momentous, less might have been more.

A pretty good thriller in an informative historical setting.