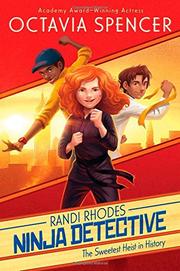 THE SWEETEST HEIST IN HISTORY

Deer Creek’s middle school ninja detectives of The Case of the Time-Capsule Bandit (2013) take on crime in New York City.

There’s not a lot of excitement and crime in Deer Creek, so Randi can’t wait for her Thanksgiving visit with her Brooklyn aunt. But her father’s publisher wants to send him on a book tour that week, devastating Randi when he chooses work over family. Luckily, Pudge’s dad offers Randi and D.C. (whose father has just canceled his Thanksgiving visit, which would have been the first visit in years) a ride to New York, as it’s on the way to Pudge’s grandmother in Boston. They talk Pudge’s dad into letting him stay in New York, beginning his rule-free vacation—a comedic subplot. But the museum across from her aunt’s apartment is hosting an exhibition of priceless Fabergé eggs, and shady characters are circling. Around their uncovering a mob boss’ schemes, Randi and D.C. grow through their subplots. D.C.’s attempts to locate his father undermine his confidence but bring him into contact with a personal hero and an exciting opportunity. Randi learns cool secrets about her deceased mother, which she absorbs with believable complexity. Ultimately, they help her to come to a mature understanding of her father. The character development gracefully augments the fun high jinks of the heist storyline.