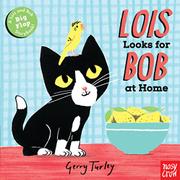 LOIS LOOKS FOR BOB AT HOME

Lois, a winsome kitty, looks for Bob, her unlikely bird companion, in this clever lift-the-flap board book.

The black-and-white cat with expressive, large yellow eyes looks “behind the guitar,” “on the table,” “in the cupboard,” “by the coats,” and “on the windowsill” before finally finding Bob “on the armchair.” Behind each object, printed on a shaped gatefold, is a different animal—just not the bird hinted at on the cover until the last. When the animals are revealed, they are identified by a proper name rather than by the generic name of the animal; this is followed by a comment or question. The narrator announces that it’s “Daphne!” (a mouse) inside the cupboard and then asks, “Do you think she’s supposed to be eating that cheese?” Young children who are just learning to recognize common animals may initially be confused by a bunny named “Clifford” or a fish named “Eugene,” opening up an opportunity for adult-child conversation that’s reinforced by the follow-up question. A companion volume, Lois Looks for Bob at the Park, follows the same format. The sturdy flaps are large, interesting shapes that are also easily manipulated. The illustrations are clear and uncluttered, tuxedo cat Lois standing out against muted, pastel backgrounds.

Best for sharing one-on-one with little ones.