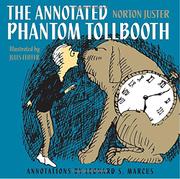 Still ferrying dazzled readers to Dictionopolis and beyond 50 years after his first appearance, young Milo is accompanied this time through by encyclopedic commentary from our generation’s leading (and most readable) expert on the history of children’s literature and publishing.

Expanding considerably on a chapter in his Funny Business: Conversations with Writers of Comedy (2009), Leonard opens with typically lucid and well-organized pictures of both Juster’s and Feiffer’s formative years and later careers, interwoven with accounts of the book’s conception, publication and critical response. In notes running alongside the ensuing facsimile, he puts on an intellectual show. He serves up for the book’s second line (“When [Milo] was in school he longed to be out, and when he was out he longed to be in”) references to Max Weber, Jane Jacobs and the Marx Brothers’ Animal Crackers, for instance, and closes with a spot-on characterization of Feiffer’s tailpiece illustration as “a kind of Blakean force field, a whirlwind of energy both potential and real.” In between, he delivers notes on topics as diverse as the etymological origins of “BALDERDASH!” and mimetic architecture to textual parallels with the Wizard of Oz  and echoes of Winsor McKay and George Grosz in the art. Family photos, scrawled notes and images of handwritten and typescript manuscript pages further gloss a work that never ages nor fails to astonish.

A timeless tribute to learning as play, much enriched with background on even the (seemingly) throwaway lines and puns.