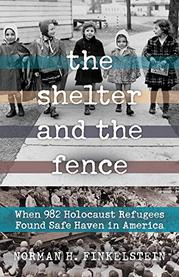 THE SHELTER AND THE FENCE

Primary sources enliven this history of the New York state refugee camp that housed nearly 1,000 people displaced by the Nazis.

In 1944, a U.S. Navy ship brings 982 displaced people from Italy to New York’s Fort Ontario in Oswego. The vast majority—874—are Jews, the rest are Christians, and all are refugees from Nazi-occupied Europe. They’re the beneficiaries of a far too limited American program to help some victims of horrific persecution. Augmented by photographs and drawing on first-person accounts and government records, this is a history of European refugees, many of whom are death-camp survivors, who exist in a middle ground between immigrant and prisoner. They’ve signed agreements acknowledging that they’re “guests” who aren’t allowed to work and who’ll be returned to Europe at the war’s end. But it’s still upsetting that they’re confined in the camp. In creating the camp, the War Relocation Authority drew on its expertise in running the Japanese concentration camps (called “internment camps” in the text) in the U.S.; after pointing this out, the history doesn’t ask any of the uncomfortable questions thus raised. The judgment of the government’s treatment of the White (by American standards, if not by German) refugees is mostly positive. A brief introduction to nativism and “America First” policies yields to praise of the friendships between New Yorkers and the refugees. Quoted primary sources aren’t always well-contextualized in the text.

Interesting anecdotes mitigate the missed opportunities in this history.