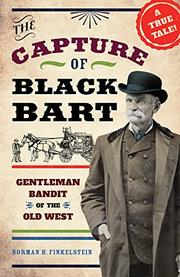 Gentleman Bandit of the Old West

Stagecoach robbers were common in the late 1800s, but Black Bart’s fame as a bandit derived from his gentlemanly ways.

In northern California, between 1875 and 1883, Black Bart robbed nearly 30 Wells Fargo stagecoaches without ever firing his gun. In fact, Black Bart never even loaded his gun for fear of hurting someone. He was almost unfailingly polite to those he robbed, had a sense of humor, and even left the occasional poem behind, signed “Black Bart the Po8.” Newspaper stories about the gentleman bandit’s exploits and about Jim Hume, the Wells Fargo chief detective who doggedly pursued him, made Black Bart a folk hero and provide grist for Finkelstein’s narrative. Black Bart enjoyed the chase and genially taunted his pursuer, asking one driver he robbed to give his regards to Hume. The detective used scientific methods to track down robbers, identifying patterns, using sophisticated interrogation techniques, and introducing ballistics to prove guilt, all of which is recounted in a lively narrative punctuated by archival illustrations (reinforcing the mistaken image of an all-white West) and the occasional sidebar to add further context. In addition to the colorful story of this bandit’s exploits and his pursuit, Finkelstein offers interesting insight into the importance of stagecoaches in communication and transportation and tells what it was like to be both a driver and passenger.